For those wondering why Hannah choose DUST and WIND for her Knucks, she's left a comment in the previous post. Time flew by last week. We did some baking (muffins and bread), and a few other things, but it's just never enough time to do it all. She'll be back later in April or May, not sure yet, I'll sure miss her though. 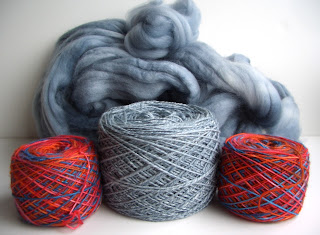 For Christmas I got this Kool Aid dyed sock yarn from Sybille. I'm showing it here with my Silver dollar yarn cake, and the left over roving. The little yarn cakes are 50g each.

I've decided (another decision I have to stick to), that I'm going to knit away on my sock yarn, which I've received over the last two years. Reason for that decision was, that my daughter asked me, whether I had knit some socks with the yarn she gave me yet, or not. I had not. She gave me sock yarn in 2006 and twice in 2007. I was going through my bins and bags and took out several gifted sock yarns, to put it in my knitting basket. I started with these, because they were already there. 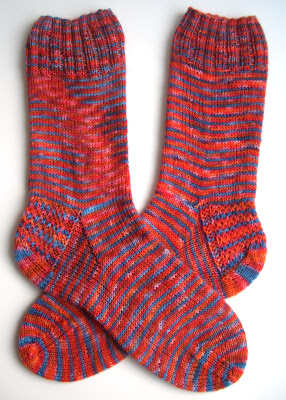 Sybille did a fine job dyeing this yarn. The first sock did a little bit of pooling, the second sock not at all. I like the colors a lot. I just felt like plain vanilla socks, cuff down, nothing exciting. After the crochet scarf I didn't knit for at least 10 days, but I did a lot of spinning. After the first of these socks was finished, I felt the knitting mojo return. That felt good too. 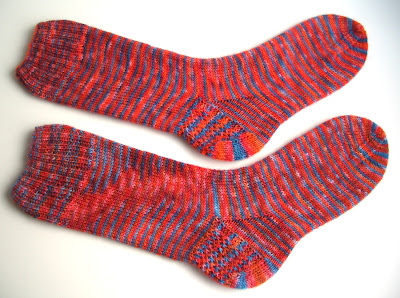 Over the weekend I decided (yes another decision) that I wanted to learn something new. I guess the reason why I choose "2-at-a time socks" by Melissa Morgan-Oakes, was the cover. It's green/orange, yellow/red, has stars on it, and just looked so darn inviting! And the word "Secret" is printed on it too - I had to know! (I can keep secrets, but if somebody wants to reveal one, I'm all ears)
It's not like I suffer SSS (second sock syndrome), that's never been a real problem with me. I just thought I'd like to know how it is to knit two socks on one circular needle. So now I know. I'm not done yet with my first pair of socks. Pictures following as soon as they are done. Of course I used some gifted sock yarn. 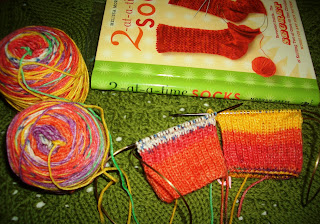 This book has some errata, which you can find on the publishers website. Link for it next time. 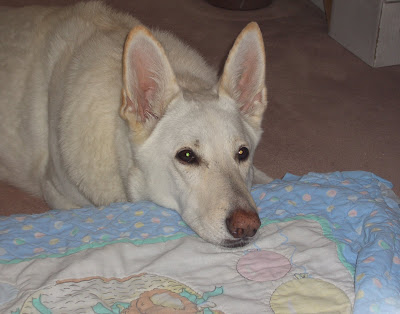 Biko is still bored, and ready like a greyhound at the dog race, to sprint out the door, as soon as we let her. We'll be going back to the Clinic on Wednesday, to take out the stitches. She still wants food whenever, you'll have to be careful, or she'll take your arm off! :o) Oh, yeah, and she's giving me the "evil eye", because she's not getting her way. :o) 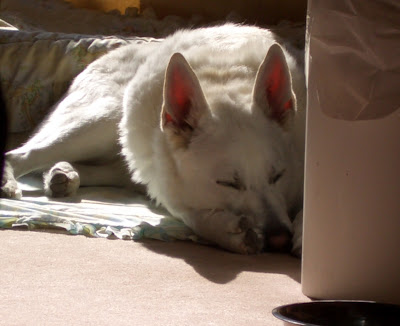 Sam's tired from running around in a sunny, still snow covered back yard. It's not so much fun without Biko. He's sleeping in front of the bed, he likes sunny spots. Look at his ears. He knows were the camera is! :o)
Posted by Monika at Monday, February 25, 2008

poor pups! They'll both be happy when Biko's back to normal again.
Great socks!

I've always imagined those big ears are just like radar and will always know just what is going on.

Love the socks. I've promised myself the same thing with the sock yarn - no new sock yarn - just knitting up what I have until it is at a reasonable level.

I am so with you on the 2-at-a-time Sock book. LOL I don't suffer SSS, but thought it would be fun to do a pair at a time. I am working on my first pair that way now. I did a toe up b4 and they were alright but I really prefer a heal flap. Good to hear
Biko is on the mend!

Pretty socks. I like the Silver Dollar yarn--beautiful colorway.

I love Sam with his paw on his face. So cute! Gift yarn is so special, isn't it?

Ahhhh...knitting socks...I should get back into that, too. I just looked at my Ravelry project page and all the things I'm really working on right now are lace stuff. :-p

How long does it take you to knit a pair of plain stockinette socks?

Biko, soon soon, will keep company for Sam outdoors and sit for his charming portrait.
They are beautiful as always, ah! the socks, the fingerless mitts, scarf for your "papá", yarns also great!
I send energy to Biko and you!

Those ears are funny -- dogs do know everything around them, don't they?

That kool-aid yarn is fantastic!

I think that's an excellent idea. I have an almost CPH knited with wool my mum and sister gaveme. That is the thing I must finish next. How exciting doing two socks at once!!! Glad to hear Biko is getting better. Sam must miss her. They both be very happy to be able to play again!!!

I'm so glad Hannah is tatooing her mitts and not her hands! I knew it had to be music related. Love how your new socks stripe. I've never been able to get my socks to do that. The new ones look really cool too.

I really need to get knitting on socks sometime again too. I have a couple patterns I want to try, but KP is keeping me busy. It's almost sad. I have nothing to show for on my blog and still, I'm knitting every day. I still like the silver dollar yarn.

Pretty socks. I've never tried socks on circs yet. Poor Biko -- she'll be so happy to get back to normal!

I'm glad to hear that Biko is getting better :)
Your socks is great!

Wow, you sure can get some amazing colors with kool aid. The socks look great.

As always I enjoyed seeing the pictures of Sam and Biko.

Love your plain socks...the yarn is so busy that a plain pattern is perfect!! Knitting two socks at a time...not sure I could handle that one ;)

That Kool-Aid yarn is so pretty! And the socks are SO cute! I think we need a close up yarn pron shot of the Silver Dollar, that color is amazing. Robby says "woof woof" to Biko!

I am happy that Biko is getting better and better.

As always, your socks are amazingly beautiful! Love the colors - so fresh & bright! That Silver Dollar yarn is like platinum - very much desired!!

Dontcha' love the "secret" thing on the cover? I love the whole book really (but I am biased, of course)!

That Kool-Aid yarn has to be the best Kool Aid dye job I've ever seen. Excellent depth of color!!

Fantastic socks! Very cute how those "ears" have "eyes"!