As some of you already know, the Clinic sent us home without any pain killers for Biko! After non-stop crying all Sunday morning, I checked up on the pills they gave us, on the internet, and found out, that they were steroids and stomach prodection only. I'm calm now, but at that point I was ready to blow a fuse!

The maddening part of it all was, besides that poor Biko was in pain, that the people from the Clinic tried to make us the guilty part. They said, we had told them, that we had some pain killers at home! WTF! - Breath deeply! Who has stuff like that at home?

After calling back and forth, it turned out, that the Doctor on duty was allowed to prescribe some pain killers for her (oh my, thank you very much), so my son drove down there (1 1/2 hour drive one way) in freezing rain, to pick up the pills, which took about a minute, and drive back home, watching accidents left and right, and knowing that Biko was home still crying.
He got back at 2PM, I gave her the pill, and she stopped crying almost immedeatly. By then we were all very distraught, and you could feel the tension subside, after she relaxed and finally snoozed a bit. 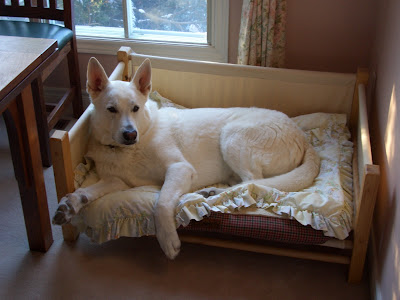 This is Sam lounging in the futon bed I dragged into the living room. Biko put one foot in it, than decided against stepping up this one step. I hadn't thought, that she can't do steps, not even this tiny one. But she knows better herself. Sam likes this bed as much as she does, for now it's his place to be during the day. At the end of this post there are pictures of Biko, but if you are squeemisch, don't look at the last picture. I did choose the one, least gruesome. 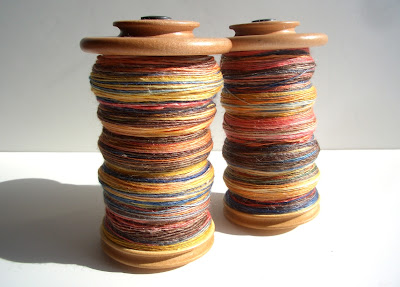 But before that, to give you a break, I show you two bobbins filled with "Fresh" merino/sea cell singels. The yarn is finished already, and I'm very pleased, but more about it in another post. 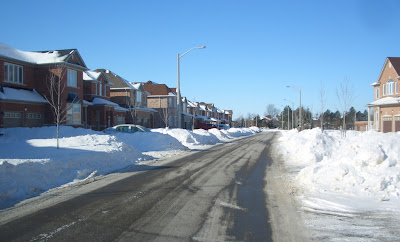 This is not our street, but close in a new neighbourhood. The houses are so close together, that they don't know where to shovel all that snow. This was Saturday. We had rain all day yesterday, so it washed away a lot of it.

Back to Biko: The following pictures where taken last night (Sunday), third day after surgery. We bought her a few new chew toys, and put them in the toy bin. She got them out one by one, and tasted them all. We even got a new Jolly Ball, which she took by the handle and showed it all around, wagging her tail. She's a totally different dog now, that she's not in pain anymore.

She doesn't like for Sam to get too close. She's warning him off, when he's pointing his nose in her direction, but on the other hand, she's always lying down in the room he's in.

So, at this point I only wish that her wound is healing fast and without complications.

Thank you all for your well wishes! They are very much appreciated! :o) 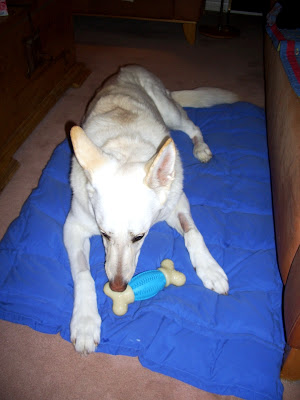 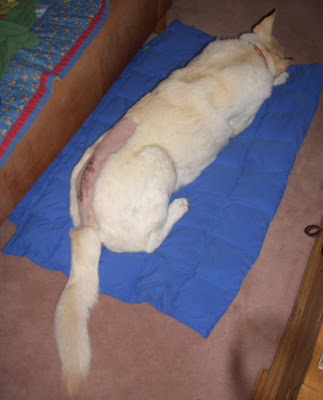 That's good that she's finally not in so much pain. I'm in a bit of awe that the vet would blame YOU for her pain. Her back doesn't look too bad. Hopefully she won't be made too much fun of while her fur grows back. :-) I recognize her toy. My friend has one for her boxers and they love it. We'll be getting one for our boy sometime.

I'm glad she is ok and busy with toys. I can't believe the pain pill thing. Have they ever heard of calling for a prescription to be filled locally? Guess not. In weather like this? Here it's been raining (hard at times) since last night. Icky weather, but perfect for reading and knitting.

Hero wants Biko's futon bed! Looks like the same barber as Hero's, but his got the base of the skull and the belly, too! LOL Glad to hear she is better with pain control - without the pain, she can relax and heal faster!

I'm glad she's home and comfortable. It is a relief to hear that she is doing better. I'm wishing she is her old self in no time.

The singles look good. I'm interessted to see how you liked spinning the sea cell.

I'm really glad that she's got her meds to help with her pain. Hope she heals well and that she'll go back to being that playful Biko .

OMG, I would have been livid!!! I can't imagine what poor Biko and all of you have been going through. That poor baby. I would have ripped that vet a good one, that's for sure. I am so glad she is no longer in pain. I know you are taking such good care of her. She will heal now that they are properly managing her pain. Kudos and Props to your wonderful son. Still praying! Milo sends a big kiss.

Oh, poor Biko! How could the vet not think of that?? And, what a good son to go out for her meds . . . but, of course, that's what family does, right?

Sending lots of healing vibes your way! From me and Chappy, both. (Though he says to reassure her that he won't come too close.)

O, poor Biko. I almost start to cry myself when I read this. I am glad you could get the painkillers for her. I hope she will be better soon!

Lovely yarn by the way and a beautiful picture of your street. Here in the Netherlands there is still no snow. I don't think we are getting any this winter. It is almost like it is spring already.

I can't believe the vet's office tried to pretend that they didn't prescribe medication because they thought you already had some. They just forgot, plain and simple. Not only do most people not keep canine or feline pain pills in their medicine cabinet, but I also wouldn't just GIVE my pet a pill from last time, unless the vet specifically said to do so. UGH.

The spinning looks so good! But I should tell you that particular colourway is Coral Reef. Fresh is the blue, white and orange one. :)

Oh, my heart just breaks for poor Biko. Good for you for being a great dog mom and getting her the medicine that she needs.

Will this surgery totally cure her physical problems?

Poor Biko, I'm glad she feels better now, and am hoping for a very speedy recovery :)

ack my goodness what in the world were they thinking!!!
You would think they would have called somewhere closer for you so you wouldn't have had to go all that way again.
Glad she's not in pain anymore bless her!
Love the futon bed thing, too cute. I think Molly would loove it.

I'm so glad Biko's back home safe and sound, and hope she has a quick recovery. Sam looks so cute all spread out and comfy on her futon-bed. And your son's definitely a keeper, braving those nasty roads to get her meds!

I'm glad you were able to get her pain killers. Too bad they didn't send them home with you in the first place!! And very thankful that your son got there and back in one piece in the crappy weather. She's definitely looking happier. That's a cool bed, btw. Where'd you ever get it?

I'm waiting to hear from the vet about our puppy. She went to be spayed, microchipped, and boostered today. They should call soon to say how she is and what time I can get her tomorrow. She wasn't happy this morning when she couldn't have a drink or any breakfast!

Oh, poor Biko!
I really hope she is free from pain now.

Your poor baby...glad she got some relief finally!!

Hope every day is a little easier!

Hooray!! Biko is home and on the mend! You must be so relieved! And spinning is a good channel for anxiety! (even if you're not too happy with the roving! LOL!) Very interesting color on the green & pink. You may be pleasantly surprised when you do actually knit it up (yes, I'm saying it to encourage you!) LOL! The pencil roving is pretty cool! Are you going to straight ply it or Navajo? How does sea cell compare to spinning straight wool? Easier or harder?

So relieved to hear Bikos doing better. That is a nasty long scar but the fur will cover it. As you said, the most important thing now is to avoid an infection. That was despicable to try and shift blame to you about the pain pills.

Hi. Very glad to hear your Biko baby is doing better. I have 2 labs and know how HARD it is when your dogs are unwell. Our one dog had ACL surgery in Dec. and we happened to have metacam on hand (yes, we have a small collection of meds) and were told to use that for pain, so I guess it does happen. It's too bad they mistook your dog for one that had a supply at home. Here's wishing you all a smooth and speedy recovery.

Oh Biko. She is so beautiful. Glad you have gotten through the worst of it. They are so vulnerable eh?

All my wished for a very speedy recovery!!!

I'm so glad to hear you were able to get the pain medication. That is awful that the vet gave you such a hard time.

Oh my goodness, poor poor little thing. I am so happy to hear he has the pain killers.

Aww poor girl! Glad she now has some relief so she can recover. Hugs!

I'm just catching up on blogs, so am a little late in wishing dear Biko a speedy recovery. I know spinal stenosis in humans can be quite painful and of course a dog can't understand why it hurts. Hopefully the surgery will give some relief and Biko will be out playing again in no time!

You have a beautiful dog, I hope she gets better very soon.

I'm totally jealous of how much snow there is in that picture, being from Texas, I'd be delighted with 1/4 of that! lol

It's a good thing you investigated and discovered Biko wasn't getting anything for pain! I'm glad she's getting better now and is interested in her toys. She'll be better before you know it! :)

Oh, that's unbelievable the stress you had to go through to get pain killers! Glad Biko is feeling better.