I've some weird days behind me. For the last 2 weeks, I've been knitting this shawl, as a prototype for Maggie's shawl, which is blocking right now, and I don't have pictures yet. To knit the first shawl was quite fun, because I had to think about what's next, and how it all goes together, take notes, and knit, knit, knit. It occurred to me that I should write up the pattern for sale, since it was so much work. I used sock yarn for the first one, which I had in my stash, and enough of it (990yds needed) for this project. I did not know how big it would be in the end, but had to keep in mind that Maggie gave me 1,134 yds of her sock yarn to knit a shawl with. The yarn is thinner, and even though it used more yds, it's lighter than the other one. 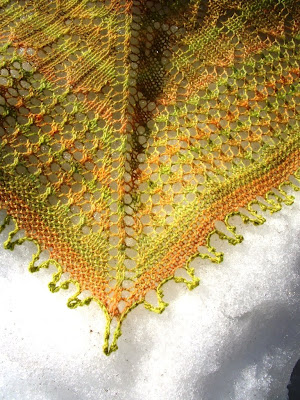 I'll show you pictures and tell you more specifics, once the other shawl is photographed. What the weird part was about all this, is that I started to write the pattern down, even found a willing test knitter, and was all ready to go. I even found a name for this shawl "Mohana" which means "charming". Still not the weird part - maybe a little bit.

I like to write down patterns, just for fun, now and then, but this time it was different. To get to the point, I felt so unhappy about the whole thing, that during the last two days I was restless, uncomfortable; I looked at my current project on my needles, and almost felt disgust, wanted to throw it across the room (but didn't, it's too lovely). Loosing my love for knitting? Of course at first I didn't know what hit me, and while tossing and turning I suddenly knew, I could not do it for money! Once I realized that I was fine. I think that's weird. Don't you?

Now comes another weird part.
This morning, Biko woke me up at 4:15 to go potty. I stayed up, and while waiting for the water to boil I checked my e-mails. I found a nice surprise in one of them. Marianne has sent me her Have a Heart sock, just because. I've been lusting after that pattern, which she is selling on her blog and you can find it on ravelry as well. Now that's sweet! I'm so ready to knit another pair of socks, I think I'll find some appropriate yarn for it and cast on this weekend.

Can you tell that I'm happy again? I've got lots to show you, but that will have to wait until next week. 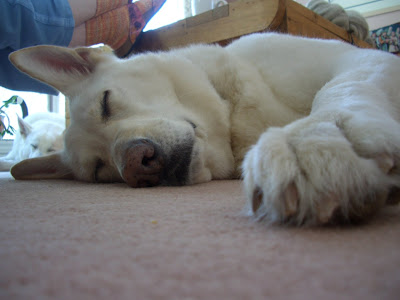 And here's a shot of BOTH dogs sleeping, while I'm knitting, and see, I'm NOT the one on the floor taking the picture. Those are my legs up on the coffee table. This big paw belongs to Biko, Sam is snoozing in the background.

I feel a load was lifted off my chest. I'll be finishing up the February Baby Sweater (on my needles now), knit with my hand spun yarn! Pics soon. Have a wonderful weekend!

PS I'll see what you'll say about the shawl, after I show you all the pictures. If you like it, I can still write it up for you, but with much less pressure (from myself of course).
Posted by Monika at Friday, April 04, 2008

Noooo, you are not weird, but I'd still like the pattern to try it. With scribbles, in pencil on graph paper, I don't care. :)

I think the lace shawl is beautiful!
No, I don't think you're terribly weird about the 'doing it for money' issue... obviously you felt very strongly about it on a bottom line level, eh? and once you figured it out and let it go and you were fine? That just makes all kinds of sense. :^)

Marianne is a lovely woman, and quite exceptional, she never ceases to amaze me with her talents.

No I don't think you are weird!! When something is right, you feel right too. Biko and Sam look very content!! Nice legs all round and lovely shawl!!

Funny how those things work out, and what we try to tell ourselves subliminally. Good for you for listening.

Great shot of the dogs!

No weird at all. I've often that that doing something for money would suck all the fun right out of it!

The shawl looks lovely. I can't wait to see it.

And that big soft puppy looks so peaceful!

not weird in the least! i make pillows as well as knit. well, every time someone says they want to buy one, i break out in a rash. okay, not really, but i do feel odd about it. then (if it is someone i know) i make one for them to give as a gift. i just can't take money for doing something i love...which is funny since the title of an inspirational book to me is called "turning your passion into profit".

The shawl is stunning -and the yarn you used is perfect! I'm glad you were able to identify the cause of your unhappiness and then let go. Maybe after you write the pattern up (if you do) then you can revisit the issue and you might feel differently?

Love the puppy pic. Does the paw smell like fritos or are only my dogs that weird? ;)

I don't think you are weird for not wanting to knit for money. It turns into a chore rather than something you enjoy as a hobby. Knitting for money would make me feel obligated to knit. I knit now because I love the fiber, the meditative quality of the process and of course the end result. That would all be lost with a deadline.

No, you are not weird!

I had the same thing while I had to knit the Icelandic sweaters. I did finish them though but I realized that the money thing makes it less fun. I also once had to sew 25 pencil and colorpencil holders for a teacher at our school. I did get a (very) little bit of money for it but the pressure I felt was not nice at all.

The picture of the dogs is beautiful.

Well Darlin' if you are weird then I can't imagine the proper adjective for myself! :o)

I know exactly what you mean regarding the selling thing. I keep telling myself that lots of people do it, and remind myself of all the patters I've bought. But when it really comes down to it, I get that same uneasy feeling you described today. I've signed up to be a seller on Ravelry but just can't pull that trigger. Maybe I ought to hire a secretary and when I'm done with patterns and projects it her job to sell them, and I'll never have to think about that! LOL

Nah, your not weird, but I do think you are a very talented and giving person.

The shawl is looking gorgeous! Love the colors. :)

It took me awhile to find Sam. Cute picture :)

No your not weird. I understand completely. I feel the same way you do. Your shawl is lovely as is all of your knits :)

It's not weird at all. Money=pressure. I think it's very hard to charge money. I really struggle with it when pricing my yarns!

I cannot wait to see this shawl! That little glimpse is so gorgeous!

It's a funny thing isn't it. When it's for love it's easy and fun. When you decide that someone should pay for it, the worrying appears. I just listen to my Inner Knitter, and when I hear that voice I re-assess.

It looks so lovely BTW.

Wow, I think it's great and amazing that you can't do it for money. I really respect you for that. I do understand how you feel. And by the way, I LOVE the shawl you're knitting! Take care, and happy knitting.

Your shawl is beautiful! Your knitting is always exquisite! And I am going to come after your a bit, and not let you off the hook that easily! Because you will have to start putting a value on yourself!!! Your time, your wonderful creative brain, your sweet ideas! Monika, I am all for not taking money for things, but at the same time, unique ideas do have a value!
Now, will you please have a re-think?! Please!

You are such a unique knitter and... 'Nuff said for now!

Nothing like a good ah-ha moment to get you going forward. Nothing strange about it. It feels right now. Another time you might go the other way and it will feel right.

I love you dog photos.

Your shawl is beautiful. Maybe you are like my son; if not for the need to make aliving, he would pay before just to work for them! I say, you create it, you should get paid for it. If you felt better, you could give it away for only a few bucks, but have it whatever way makes you happy. You pups are ever so sweet.

Hehe, YES you're weird! But the world would be a very boring place without weird people, so keep it up ;) I love your shawls, it's gorgeous!

The shawl is gorgeous, and you're not at all weird. In that instance anyway. ;) I can't knit for any one but myself, even if the project for someone else, ultimately, if you know what I mean.

Ah, there's Sam! It took me a minute to see him in the left background. Cuties.

No, you're definitely not weird; just a very nice and generous person!