Believe it or not, this is a pair! I've bought two different colorways about a year ago, with another project in mind, but it didn't work out. So I had these two yarn cakes rolling around in my sock yarn bin, until Cat's book arrived and I saw the Woven Ridge Socks. Out they came patiently waiting their turn. 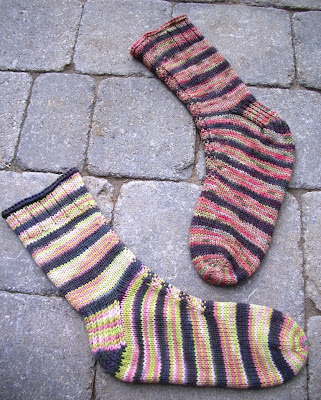 The colorway on my right food is the one used in the book. They did a marvelous job in photographing it. I always liked the linen stitch, and was pleasantly surprised when I saw a sock with it. This does not mean that this is my favorite sock from this book. I haven't decided yet. I like them all, but we'll see which one I like best, if at all possible. ;o) 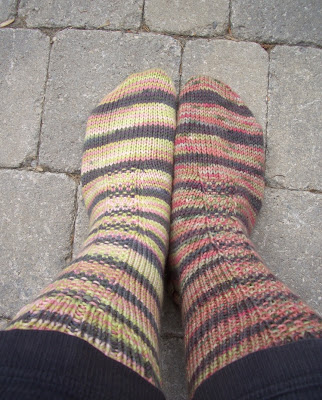 I love this book, and I love all the constructions/patterns in it, and also how the book is made up. It's very easy to find things, to go back and forth.
I did have trouble with sizing this pair. Since I had the original yarn, but not size 3mm needles, I started of with 3.25mm needles. My midfoot measures 9.5 inches, so I went with the largest size in the pattern. I did the toe and used this to measure my gauge, which was 6 sts/inch/ Perfect. After I've knit about 4.5 inches I realized that this sock is going to be huge, even for my big feet. So I ripped it, and started over with 2.75mm needles (remember, I don't have 3mm DP). For some reason the sock was still way too big. What to do???
I started over with the second size in the pattern (fewer stitches), but with 3.25mm needles and it fits perfectly! 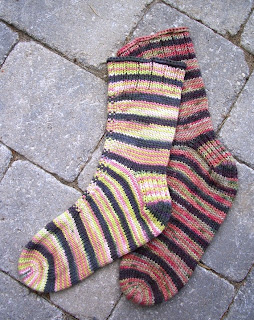 For the leg I increased 6 stitches evenly along the woven ridge part, because my leg is not straight up the same all around. I like the bind off with the double strand. It looks nice. I could have bound off a little looser, but I'm happy with it as it is.
I liked knitting with this yarn, how it glides along the needles, really wonderful to the touch. But- there's a but, in one ball I had two knots! Grrrrr! And I didn't even use it all up, so there's room for more knots. The other one had none, thank god.
I interpreted the arch increases wrong (with the first, left foot) sock. I realized my mistake with the second one, so that looks a bit different, but nothing I would rip out half a sock for. Next time I'll know.
So, well, there you have it. 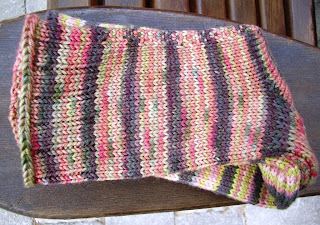 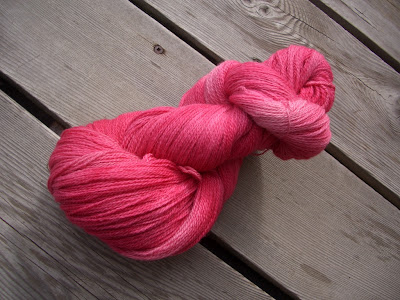 After I had such a great time dyeing yarn with turmeric, I wanted to dye this lace weight yarn with rosehip/hibiscus tea bags, lots of them. The brew had a wonderful color, and I left the yarn in it over night, as directed somewhere on the Internet. Next morning, the yarn looked sick, or dirty, or both. I washed it, and it came all out, like nothing happened at all. I had some food coloring kicking around, and but it in the microwave. It came out all mottled and splotschy, real nasty looking - again. O.K. I set up another food color bath and in it went again. It still has some lighter spots, but it's much better. I felt so bad for the yarn, that I decided I could overdye whatever I'll knit with it, whenever. Not a success story, and now I'll take a break from dyeing yarn for a while. But it's still fun from time to time! 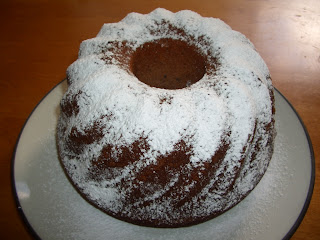 I had the urge to bake something and made this "Gugelhupf" without a recipe, just through in all the ingredients I could think of and had at hand. It's good, especially with tea. I used to bake a lot, so there's still some knowledge in my woolly brain left, that it turned out O.K. ;o) It had the potential to be a total disaster.
Something I have to confess: I've been on ravelry for quite some time now. I've uploaded a few finished projects and left it basically at that. Last week, after I've read all blogs I read, needed a knitting break and had nothing else to do, I remembered 'ravelry' and went for a looksie. Wow, you really can get lost there. I still don't use all the features, and don't participate much, but one thing's for sure. You will get startities! It's amazing what fine work people show there! I'm so inspired and would like to have a few more hands, which would constantly work on something. It's overwhelming, and wonderful. I haven't even started to go to all the places, new blogs to be discovered, and so much more. I really don't want to get sucked in, but from time to time, I'll be back there, whenever I need a boost, just looking around, appreciating all the beautiful things.

Have a nice weekend!
Posted by Monika at Friday, September 14, 2007

Your socks are even more incentive to sit down with that book and get going!

After my initial Ravelry "rush" I've settled down and begun to use it for ideas and information and posting my knitting. I don't think I have the time to get really involved. I do love it though.

Everybody around in blogland seems to bake chocolate cake - and yours looks both tasty and beautiful!
Love the pattern on your socks.
Have a great weekend!

Ummmm , That guglhopf looks very temtping , my mouth is watering . I like the colour of your laceweight , doesn't look bad at all . As I was re-organizing my stash , I came across quite a few skeins of cream /bare yarn . I can't remenber what I had planned , but seeing your dyeing experiments I'm thinking I'll do some research as well and give it a shot. Thanks for the inspiration !

I love ravelry , but don't really want to spend too much time there either. It's very handy for project inspiration and information though .

i adore the PINK! yarn, too.

ravelry, i've not really become insterested in getting in. many knitters whose blogs i read are crazy for it. perhaps it's because the yarn is still safely at my friends house waiting to move into our new place?

Oh those are nice socks! I like mismatched pairs actually. I found one store selling pairs of 3 socks instead of 2. They were very individual, bright and in a way..so ugly they were cool!

The yarn looks great! I'm sure it'll turn out great. I've been tempted to get more lace weight yarn and do some more dying.

Ravelry is great! I fell in love with all the norse socks people have knitted. I'm tempted to make my own.

I don't use all the Ravelry features either but I LOVE looking at all the pretty knitting in one place and the varying interpretations of a pattern. Plus I love to be able to see yarns actually knit up instead of a flat, lifeless picture!

Interesting, looking at your odd twins there. I love the color of your dyed yarn, it's so sweet and pink and eat a piece a cake for me, will ya?

I love your socks - and your dyeing story too. I've been there a couple of times, but I can't stop my eksperiments.

Have a happy weekend :)

Your Gugelhupf looks delicious...I made one (German turban cake) with a recipe and we were very disappointed. Maybe that's the secret -- no recipe ;)

Yes, once you get the initial "wow" about ravelry out of your system...you can just take your time and soak up all the inspiration. Today I was able to find ( and buy) one of the patterns I want to try...I'm excited, but have to wait until I get my knitting for others done.

I really like the pink yarn. I like hand dyed yarn with it's uneven colours, maybe moreso than the handpainted yarns and all the strange colour combinations 'artists' come up with that look great as a skein, but bizarre when knitted, LOL. But, that's just my opinion!

oh I'm drooling over the cake, it looks fabulous.

You're such a wonderful knitter--I'm running out of ways to say "that's beautiful!" *lol* One thing I love is how you give all the details--yarn, pattern, needle size, modifications you made, how you feel about the yarn and pattern and needles... That's both helpful and interesting.

I'm on the Ravelry waiting list--somewhere. They may get down to me sometime next year.

I love those socks! Sorry about the annoying knot; I hate when that happens...
That cake looks so yummy!!!