If you came here to see and read something about knitting, you'll be disappointed. I've nothing to show you. At least fiber related. This weekend, I had ants in my pants, so to speak. Saturday, was a day I don't want to repeat anytime soon.
I've discovered that knitting or spinning does nothing for me, when I don't have my inner peace, and so I did not knit a stitch on Saturday, and this lovely dyed Lincoln (dyed by Spunky Eclectics Amy) roving kicked my butt big time. I'm afraid I've lost quite a bit of it, and the weird thing I still have on my wheel I'll have to remove and throw away. I would have never thought, that after spinning quite some yarn, this would happen. Maybe it refused to be treated that way, because I thought since it's quite a scratchy fiber, and I don't know what I would do with it (nothing but felting comes to mind, and I don't like felting very much), I thought I would spin it up quickly, rather thicker than usual, and give Navajo plying another try. Well, I said IT refused to be treated like that, because I practically had to stuff it into the orifice and it still wouldn't wind on. Anyway, it was a nasty experience, which I have to recover from with some hot chocolate and a good book, cuddling with my new lap blanket, doggies at my feet. Sounds good to me. It doesn't happen that often, that nothings going according to my plan. Have to rethink and regroup. 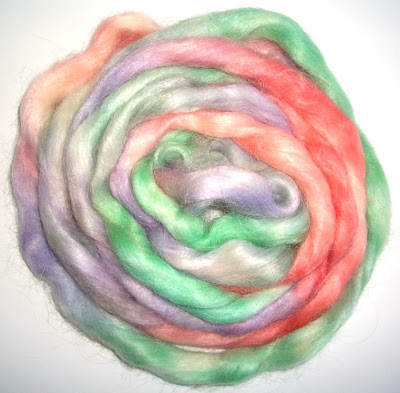 Well, today/Sunday was much better! I've finished one of the secret socks, and started the second one. It's going well. I even like the cables down the front! Figure that!
Since this is a secret project, I started to knit a sock from Cat Brodhi's new book. I've even got the same yarn she uses in the book and the same colorway for this sock, and still, I've ripped it out three times already, and still can't get it right. Hmmh. I'll show you, as soon as there is something to show.
So, what else, a distraction would be nice. Biko is always good for this one. Summer is coming to an end, so these pictures will be the last ones of her wet self and pool. Even though she's still swimming and would do so way til October or as long as the pool is open. It's a little picture story, don't need words to explain, do I? 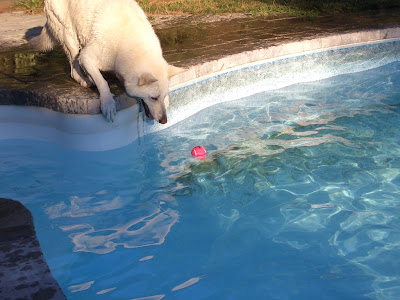 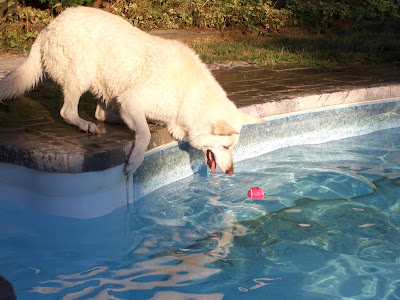 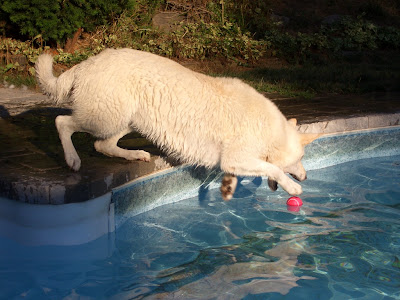 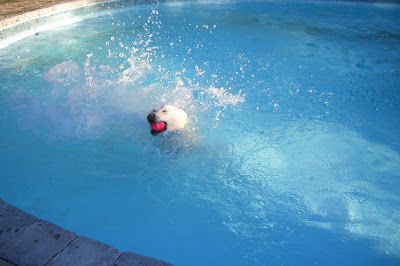 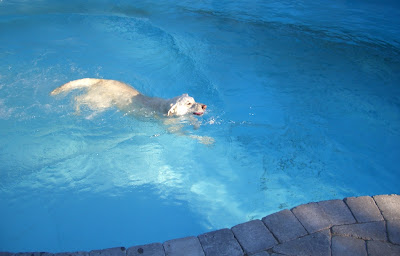 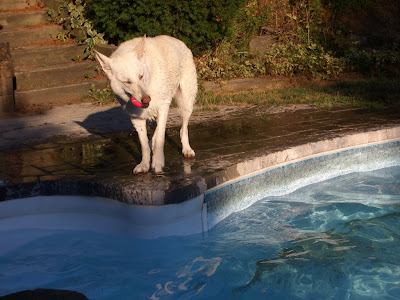 Keep your fingers crossed for me, that the Knitting Goddess is kindly disposed and lets me get on with my knitting! I'll not push my luck, and go read something for a change. Over and out!
Posted by Monika at Sunday, September 09, 2007

Hot chocolate and a good book sounds like the perfect cure - that and a nice cool Fall day! Can't wait to see the secret socks - I'm intrigued. Biko looks just like a polar bear in the water - beautiful pictures.

I'll send a little knitting prayer up for you and let's hope the goddess will respond. After all, it's only a couple more days until the 15th and you better get your act together by then. Think "Braids"

Biko is so cute! Does Sam swim too?

My fingers are crossed for you :)

That is one happy dog, love the pictures.

Awwww..I how you feel better soon!

Does it help to know that you're not alone? So many times I've been frustrated that nothing is turning out the way I want and so I try something else. What's really needed is just a day off, a day away from all the things we usually do. Taking time to read a book was a good thing. Cooler weather is coming and all things will be better.

Sorry your spinning didn't go well for you :( Don't get too down...you have been doing so well up to now. Rest up and I'm sure you'll be back to your spinning and knitting real soon.

hehe..Your Biko sounds like she's great for a smile. Maybe she felt that you needed a good laugh to help your disposition.

Biko is adorable. I'm crossing my fingers for your knitting and spinning mojo to return to you soon.

You should have come to the Kitchener-Waterloo Knitter's Fair! That way, even if you don't knit a stitch all day, you are still surrounded by awesome fibers, yarns, and patterns!

Okay...call me crazy but does anyone else see a face in the multi-coloured yarn above? Hmmm....

What pretty roving; sorry it was being so difficult (maybe it came from a mean sheep?) Biko is soooo cute! Can't wait to see your Bordhi socks!

My goodness, I missed these pictures when you first posted them. How adorable. What a swimmer he is! It must be tons of fun for you to watch him.

Some days you just have to take a break. I've been reading rather than knitting, too.

I agree that Biko looks just like a polar bear when she's in the water. And what super exercise for her! Lucky girl.