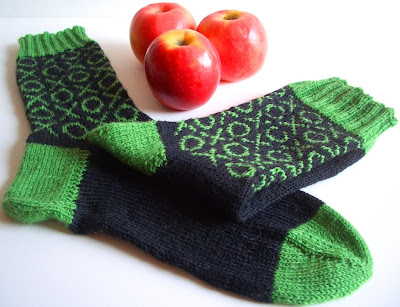 Howdy, folks! ;o)
Let me first thank you! I never expected such a response to the Doily Blanket! Some where wondering, how I could knit this so fast. Well, it has only 101 rows. The first 50 rows or so, go very quickly, and I was determent and highly motivated. I love it.

We got the Sockamania Club pattern for September on September 3rd. I was already waiting for it. I was quite disappointed to see that it was Fair Isle knitting. I now know, that I dislike this technique more than cable knitting! The prove: I've ripped the mitten I started. I was getting quite disconcerted whenever I picked it up. Also the contrast didn't show to its advantage, so I gave up. It was too small for my hand anyway. 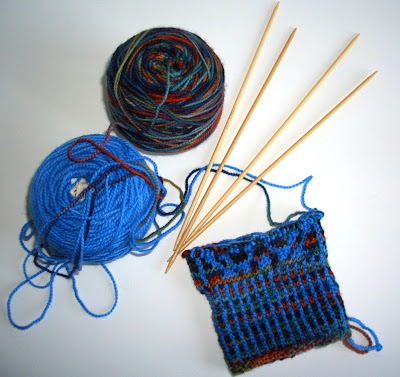 Back to the Sockamania socks: At first I was thinking of sitting this one out, but for some reason I got quite ambitious and cast on. It was obviously going to be a big sock, so I decided to make it a Birthday present for my daughters boyfriend. 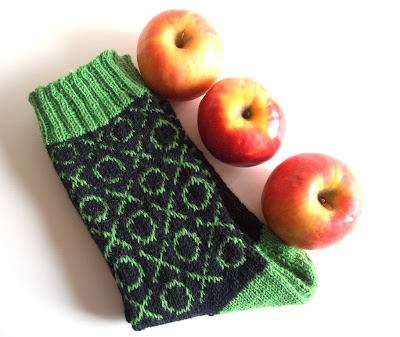 modifications: I made the cuff longer, I used the German heel with fewer rows, and I knit a few rows in green, before I started to decrease for the toe.

I'm NOT pleased with these. The Fair Isle part is irregular and tight, although the second sock was much better (practice makes perfect?). I normally DON'T use 2.75mm needles for a 4-ply sock yarn. The knitted fabric is just too loose for my taste. But I knew I had to, because the Fair Isle part would have been too tight, now it's going over the heel with just a little bit of pulling. I don't know why I didn't change to smaller needles for the heel and foot part, maybe because I was in a hurry and didn't want to rip it out again, because I have to mail them by tomorrow. So they are on the loose and wide side. I still hope they'll fit and he likes them. I'm sure he likes the colors.

So, now I've got my La Dentelle Bele scarf on my needles. I'm knitting on it when I'm in between new projects, so it's growing slowly but surely. And - I will cast on for a pair of socks for my son (his birthday is coming up soon). But I have to knit them whenever he's out of the house, so he doesn't get suspicious.

September 15th is coming closer and closer and with it, the start of another KAL. Lots of time though!

I admire your ability to complete these KAL projects. The socks look fantastic and the shawl is beautiful. Where do you find the time?

Wow! Cute socks and that SHAWL!

You made those in 3 days??? Mens size 11 1/2?? I am impressed!! I love the green/black combo.
In my experience it's not the size of the needle that makes them smaller/larger - it's the length of the floats.
and that mitten sure was looking pretty :-(

The socks look really nice. I'm sure the boyfriend will be pleased! I love the color combination you used - good choice.

Love those socks ! Three days for a pair of socks - I can barely manage a pair a month !

hey... cool socks... I must say that you are very dedicated to your knitting!

I love the socks. I think they're quite cute myself. :D Holy cow though. 11 1/2 size foot. My husband wears 10....He blames hockey. :D
I'm the same way on mittens at the moment. I have a pair sitting on my desk right now wondering why I'm not picking them up.
I hope your son isn't like my husband. He can guess any present you have wrapped. He feels it up and then starts guessing and BAM! Figures it out.

I like your socks!
Wish I had your determination to complete kals... I don't.
I'm in the sockamania too, but did'n know what sock that was up until now ^^
have a great weekend!

Your sock are really cute! You are such a speedy knitter :)

Your dolly blanket is beautiful!

The socks look good, sorry to hear you're not happy with them.

I love those XO socks! I'm sorry you're not happy with them, but they look fantastic! I've had some annoying fair isle experiences, but they always "fix" themselves with blocking.