In my last post I was pondering the idea of training Sam to alert me to the steaming of my water kettle. Monica reminded me, that it doesn't always have to be the hard way. I was rummaging around in a kitchen drawer to find the whistle, which came with the pot. Ha! Used it already, and now I'm never going to stand and wait for the water to boil again (or not stand and let it burn out).

My sweater is done, thru and thru wet, and blocking. It will be a few days until it will be dry enough, and ready for a photo shoot. So lets talk about something else instead.

I've been spinning today, for an hour, in the end my right hand, arm and fingers hurt like hell. I think it's partly because of this wool/mohair blend. It's really hard to spin. I have to do it differently as I've become used to. 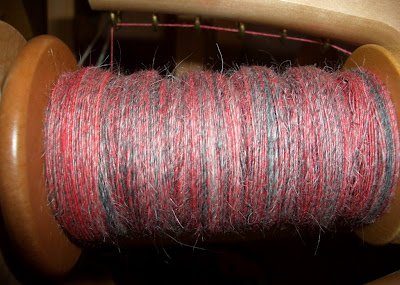 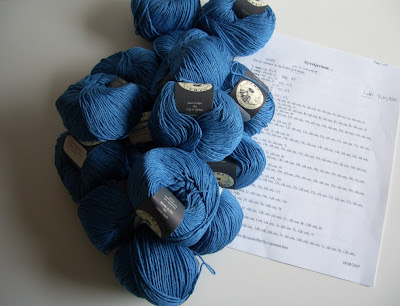 How does this spun yarn look to you? I'm thinking rag. I don't know, it might surprise me in the end, as usual. I'm going to 3-ply it again, but this is my first bobbin, and I'm not done with this one yet. It's going to be a while, because I have to force myself to sit and spin. Not that I don't like to spin all of a sudden anymore, it's just this particular roving. Oh, well.

I've been up since 4:30 AM today, to get my guys ready to go to the Airport. So I'm tired already, and it's not even dark outside yet. You know, when I'm tired I get a lot done, or my mind is in overdrive and makes me do things, I would normally not do. Point in case, I did me some translating today, a free pattern I found online, from Danish to English. Translating knitting terms is not as hard as one would think. I had a great time doing it too. I pawed through my stash and came up with some yarn,which hopefully will work for this project (I like the texture for it, and the color, but I'm not sure about the weight anymore, might be a bit too thin). I had something else out already before I found this yarn. I'm glad I kept digging.

What's that you say, there are more than ONE WIP in this house and I'm still looking for something else to cast on? That's not me, is it? ;o) I'm going to force myself to work on multiple projects, until one takes over, and there are more to come! Oh, my goodness! ;o)

I've knit 6 rows on my mittens this morning, before I could not take it anymore. If I will ever finish this pair, this will be very slow going. Then there's also Teresa's La Dentelle Belle Scarf, which I finally am able to knit, in a red merino/cotton blend yarn, very soft and sure not to be itchy around my delicate mimosa throat!

Soon there will be the Karen Noe shawl (see previous post for more information if you are interested in this KAL/pattern), and the Sockamania Club socks for September as well. So, I better get cracking!

But first, to even out the score, something about our "Princess" Biko:

See the old and dirty greenish/yellow tennis ball? It's the last one left from about 40 balls, which rolled around here all over the place. Some got chewed up, and many managed to climb the 6' fence, freeing themselves, hiding in the wild, untamed bushes behind our backyard.

Yesterday, I had to get new ones. They are alarmingly pink! Our Biko grew up with red tennis balls, and when we could not get them any longer, we had to switch to the yellow ones. She did not like the change, but her love of chasing balls was stronger.

Yesterday, we poured the new ones out in front of her, hoping she would be thrilled, she was more like scared and not at all interested. Sam chewed on one for a while, but since it's not a cookie, he lost interest real quick.

Now, we threw a pink ball at Biko, and yelled, "Catch!" Whereupon she closed her eyes and let the ball bounce off her nose. I was afraid of that.

So we took the show outside. 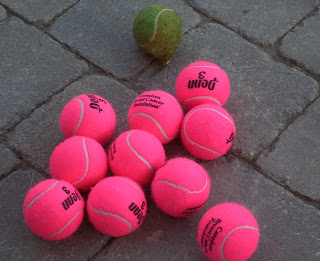 Once I told her, that these tennis balls in this garish color where bought to support a good cause, she was willing to give them a try. Of course, as soon as we threw a ball, she was after it, before she could even think straight herself. ;o) Instinct to chase took over. 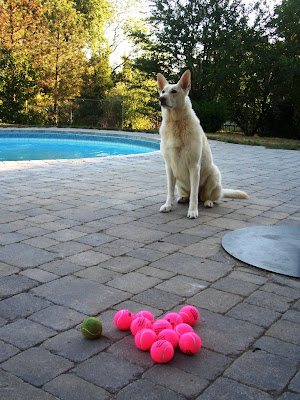 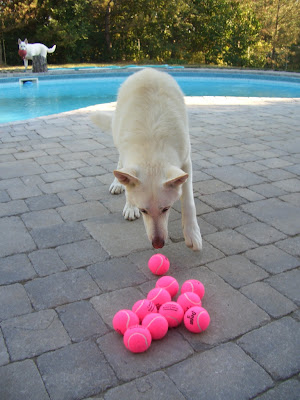 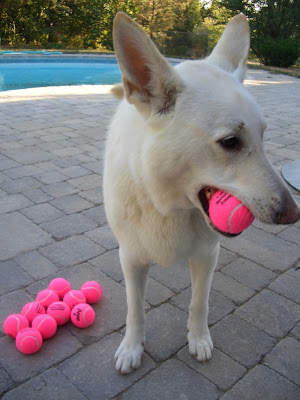 Sadly I'm no longer allowed to throw her fresh new balls, since I've whacked them too hard and lost a couple of them to the wild already! (I'm using a tennis racket, which works fine for me, because otherwise I would throw the ball like a girl, and never in the direction I want). ;o)
After the first frost, I'm going in, and hope to find some of the balls outside the fence. Right now, it would be deathly, because the rag weed is "King of the yard" right now, kicking our butts, with us loosing our cool to seasonal allergies.
Posted by Monika at Wednesday, August 29, 2007

Nice spinning!! I am amazed at the way people 'make' wool!! I love Bino and her new tennis balls: she is a creature of habit and I can spy Sam in one picture with his red ball too!! Good kettle get there too!!!

Your spinning looks great. Really fine. I'll bet it would look perfect as a 3-ply. It IS tough to spin this sort of blend. It gets a lot easier as you go. My biggest issue is spinning that sort of stuff in high humidity. Makes my hands sweaty and then it's horrible to spin. Keep at it. It looks wonderful.

I'm glad Biko has some new balls that she finds okay!

Hope the spinning goes alright. hopefully it will get easier as you go along.

You'll never lose those balls! My eyes, my eyes! (just kidding) Can't wait to see what your new project looks like - that yarn is so pretty.

I see in the background that your Sam is walking around with that large deflated red ball. LOL. I don't think I've really ever seen pics of him outside without it. It's like my cat and his teddy bear. I used to have a lab that loved sticks. When you threw one regular sized one..he'd come back with a 4 foot log.

Yay for finished projects! A sweater is a big accomplishment! The spinning looks great. I've been oogling over spinning wheels lately.

The "ignoring" picture of Biko is just superb. How did you get that pose? We go through Kong toys like you go through tennis balls. But, oh, isn't it worth it?

Awww, Biko and her new tennis balls, this is a great story :-)

Hi Monika,
I too would love to knit the Karen Noe shawl pattern. Any idea how I can get the pattern in English? Thanks and I love your blog!

Can't wait to see the sweater. You have such a lot of fun projects lined up - maybe the spinning can wait for a little bit. Pink tennis balls - what a treat!

I gotta admit that I have never seen tennis balls quite like that before! LOL

Love the pictures of Biko , especially the "ignoring" one . Good luck with the spinning.

Hi!
I've been lurking your blog for some time now, admiring your beautiful knits; but more for doses of Sam & Biko as they remind me of my late Iro - who looks exactly the same but much smaller in size - maybe like a dwarf Samoyed.
Thank you for making my days pleasant with your funny dog pics!

Can't wait to see your finished sweater! Those hot pink tennis balls won't be hard to find in the grass :)I like them so much better than the green ones!

That's hilarious. Dogs are supposed to have a limited range of color vision, but all mine have had strong preferences in colors for their toys. Stella liked red gummabones best, then blue, then green; she didn't like yellow. Taenzer prefers red, and Timber prefers blue. I've never seen red tennis balls before! That should make them easy to find.

And of course you need to start something else even though you have umpty-leven other things in progress. It's what knitters do. :)

Bounced off her nose! Poor Biko. Glad she got back into the spirit of the chase.

Casting on lots of projects is EASY! That Karen Noe shawl is really pretty. At a local bookstore, we get Anna with an English translation insert. I'm going to have to look for it.

Our Grace thinks tennis balls are for eating. Then we see them again - yukk.
Li

That spun yarn is so beautiful! I think you may be right about rag. Biko is so funny; I never knew dogs could be so finicky about their toys!