Hi, my name is Monika, and I suck at Navajo plying ...

Last Monday the 12th I went to Serenity Knits to get some Noro Silk Garden, and some Koigu. The store was closed. Next possible visit would have been Saturday. I was very disappointed that the store was closed. If I wants yarn, I wants it now! Imagine my surprise when I got an e-mail, announcing their second Christmas Open House on Saturday the 17th, the day I wanted to go there anyway! Needless to say I got more than Noro Silk Garden, and Koigu. I filled out some ballots for door prizes, all of them desirable goodies for knitters. :o) I was very sorry that I was in a hurry, because the Ladies had wonderful cookies there, and the smell of hot apple cider was just spreading throughout the store. Did I mention I went there early? Like right after they opened at 9 AM? Well I did.
Last night, it was late Sunday afternoon, I got a call from Laurie, one of the owners, to tell me that I won a door prize, so I have to go back to pick it up. I'm already thinking what I would need, once there, to make the trip worthwhile. Hm.
And regarding the yarn I bought, do not think I've started knitting any of it! But at least this time I bought the yarn with specific projects in mind.
So, now we come to this blogs title. On Saturday, after my LYS outing, I sat down to ply, and ply, and ply some more. Hours, and hours of plying. Well, I did ply on Friday, and on Thursday as well, and I think I started plying on Wednesday.
I got the 3-ply done, worth 2 pairs of socks in size 10. Never again! It's so boring to sit and ply, I think I took a nap here and there. All of the three singles broke once, which woke me up, and brought a little excitement into it. My Jumbo bobbin was backed to the fullest when I was done. Little happy dance, and on to the next - 2 ply. Very uneventful, everything went smoothly, but oh so booooring! I used to think I like plying best, because it brings me so close to the finished product. But that's only true for small projects.
So, to get it over with I decided to Navajo ply right away. In theory I know how to do it, and so on, but it was a disaster, once again. I treadled very slowly; I think I did all the right moves, or not, and I didn't get as stressed as the couple of times I Navajo plied before. In any case, I gave up caring about smoothness, and loops, pretty soon. I don't like how this yarn looks, and it's such a shame. As I said in the previous post, this yarn is holding a surprise. It came like this (the little balls of fiber are not included in this project. I think they are meant for needle felting. It came in my Birthday package from my daughter Hannah). 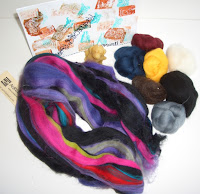 When I pulled it apart it became obvious that the colores separated easily, at least most of them. What to do? I was hoping to get enough out of it for a hat. I started with black and moved through the colores to where no black fibers where anywhere near anymore. I liked the idea, despite that it was hard to spin, because it stuck together even pre-drafted. I think my idea would have worked, if I would have been able to properly Navajo ply. I'm either going to abandon this kind of plying altogether, or I'll have to find someone, who can show me how to do it right. All the pictures on the Internet didn't really help me this time. 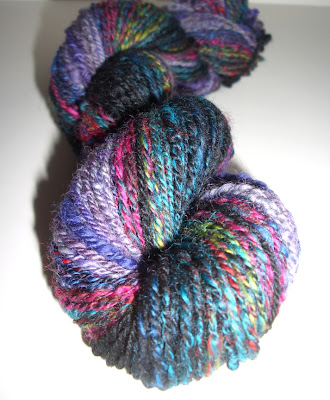 Here you have it: New Zealand Wool Navajo plied; going to be a hat, but not for my head. It's only 115yds. There is a section which is only black and gets more colorful in the middle, until it's only lilac/purplish in the end. I'm still liking the idea. 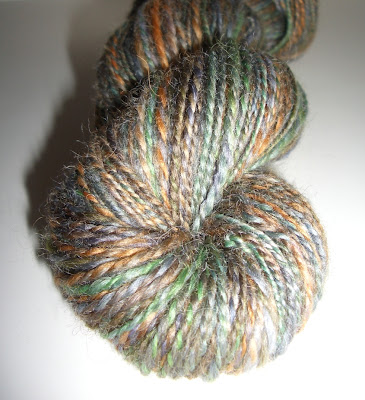 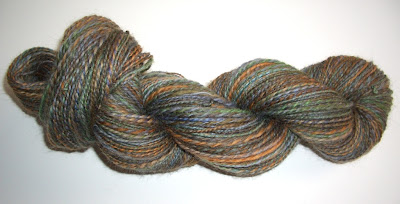 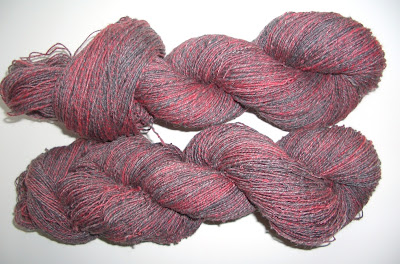 Yesterday was a gorgeous day. While the men of the house raked leaves and filled paper bags, I was having fun with the dogs. I love the sight of Birch trees against a blue sky, can't get enough of it. 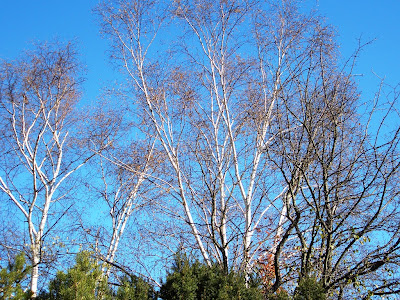 The ground was frozen for the first time this fall; the top layer of the rainwater in the pool was frozen too, and the bucket with water for the dogs had a layer of ice too, which I had to break, so they could drink. Sam's prepared for the coming winter, snow shovel and all. He "found" it again, and was over the moon. Forgotten was his big red ball, not a second glance in its direction. He was shouting out to the world, that he's gotten his shovel back (little did he know, that it was only for this one time). 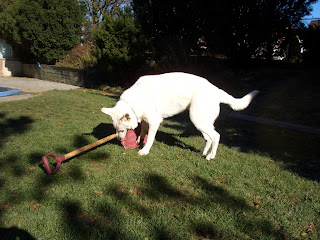 The chewed up edges cut his mouth, and under his elbows as well. I'm sorry for him, because nothing makes him happier than his shovel. So let him play for this one outing and hide it again. When he gets a good grip on it, he runs around, and then you've got to watch out for your knees, or in Biko's case her head. He bonked her once, and my knees escaped just barely. 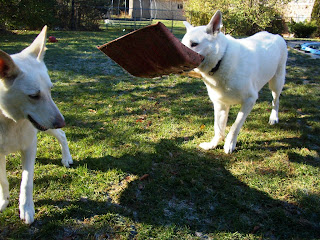 So when the time has come, I took the shovel and held it high with my left hand, the right hand took a picture of this face .... so cute, if I say so myself. Sorry Sam, it's for your own good. And didn't you know, that things we like and have fun with, are NOT good for us (O.K. my mind's not on a shovel here, it's more focused on chocolate, very random, I know)? 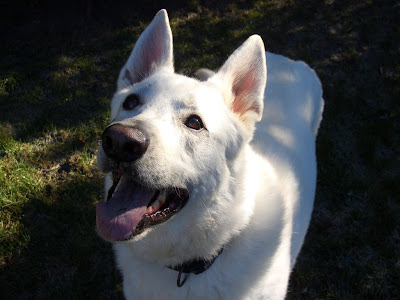 Monika as I non-spinner I can't relate to your Navajo woes, but I'm also knitting the mystery sock and love the colors in yours. I enjoy your doggie pics - Sam does look adorable in his close-up. Shirley, in PA

Sorry about your mis-adventures with the navajo ply method. I've actually never tried and have just set aside some left over singles to try with. your finished goods look yummy non the less!

I don't know what you're talking about, I think it turned out quite nicely. Although, the yarn wench has a video of navajo plying on her blog.

Your yarn is gorgeous! You must have a huge stash right now. One that I'd be envious of I'm sure:D!

Sam looks like he's having a lot of fun with his shovel. How cute is that, I love how animals have their little toys that they attach to. Like my cat and his teddy bears that he carries around. He does look adorable in that picture. :D

Hopefully you can get sdome help with the navajo plying. But the yarn is pretty anyway.

I would love to see Sam carrying around that shovel! I wonder what is going through his head and what he thinks he'll do with that shovel..

Sam is so funny... loves himself a good snow shovel,eh? heh. They're both so beautiful.

I like the yarn you've made... all of it but that Goblin Eyes had the drool factor really cranked up.

Wow! He sure does love that shovel doesn't he? Too cute!

First, I don't think your yarn sucks, but you're the one who needs to be happy with it. :o)

Also, besides slowing down your treadling, are you changing the ratio on your wheel? I put mine on the slowest AND slow down my treadling because my hands can't move that fast! Just a thought.

It may have been boring to spin but the yarn is very pretty :)

Your plied yarn is just gorgeous. Wow! I'm sorry it was difficult but the results are spectacular. Guess what book I ordered? BW's Mosaic Knitting. I still love the afghan you made for your DD. Darling picture of Sam. We have to keep stuff away from Milo, too. The other night on our walk he came out of the field with some animal's innards is his mouth. Yuck! He as so proud.

I love the goblin eyes yarn, it will make fantastic mittens.

What is it with dogs and tools? Mine love them too. Right now it is the rake that they are carring around like King Arthur's sword Excaliber!
I, too, think your yarn is gorgeous. It will be beautiful knit up.

The Navajo plying, does take a bit of practice - I'm not a big fan either - but have noticed that if I have my singles positioned off to my left hand side (as opposed to on the right hand side, or even in front of me) the looping thing is really *much* easier...

It looks gorgeous in the pic - but I have some silk that I absolutely mangled trying to Navajo ply two strands together at the same time, turned it into a 6 ply - and could have been nice - but boy it sure isn't! Bummer when that happens ;)

1. The pic of Sam with the shovel in his mouth is just crying out for a "shovel it yourself" LOLCATs caption!!
2. My Navaho ply comes out like cardboard. So I quit.

Sam is so funny!! I love that he wants to play with a shovel, inspite of the inherent difficulties. Poor Biko and you, though dogs have harder heads than we have knees!! One of my favourite dog expressions is their look of love for an inanimate or edible item!!!

Sam has such a lovely smile :)

Isn't it funny the things our "kids" make toys out of? Pumpkin goes grazy when I tear open a USPS mailing box and give him the pull strip (He learned this from The Meezer of course!) He can hear that noise no matter where he is and comes running!

I really like that Goblin Eyes Romney - beautiful yarn!!
Can't wait to see what you won!

Like others have mentioned I really like the yarn you spin, even the navajo plied stuff :). I got a good chuckle out of your title and the pictures of Sam with his snow shovel.

Okay, I can understand how plying might be boring, but the end result is *beautiful*!

Sam is so cute! And you know what? Timber loves snow shovels, too. But he waits until I'm actually using one, then comes and grabs the top edge and plays tug. Fortunately this always completely cracks me up, so i can't get mad at him. It does sort of interfere with the shoveling, but it's so adorable--and so's your Sam!

Hey! Give me back my shovel!

What's wrong with your plying? It looks gorgeous to me.

Oh my! Navaho ply! If you want to cry, give it a try! LOL!!! I'm sure I'll be the next one singing this song! I have some roving I'm planning to spin just for that ... maybe I'll put it off for a bit yet! Love your mohair! Don't worry about the overtwist - I think it will relax some knit up. It will certainly make the socks more durable .. let that thought cheer you! Nice to see your spinning!

I love that black/multi yarn! Gorgeous! Sam is so funny that he's passed over the red ball for the shovel!